Many thanks to the Buck Free Press for a very nice article.

http://www.bucksfreepress.co.uk/leisure/10274260.High_Wycombe_author_releases_first_novel/
Posted by Gary at 14:36 No comments:

The Fixer is real!

Great job by Tim Lawrie in creating a wonderful cover, and great job by Troubador in guiding me through the process and turning my dream into a reality.

The Fixer is REAL!

CHAPTER ONE
One year ago

Jean Michel Mbozi thumped the mahogany table with such force that the empty glasses jumped and those with water wobbled, prompting the owners to reach out and steady them. The soldier at the panelled wood door shuffled his feet, and then relaxed as he removed his hand from his side arm, resuming his At Attention posture.
‘I will not be spoken to in this way!’
‘Mr. Mbozi …’
‘You promised me a fair, negotiated settlement if I brought my people to the table …’
‘Mr. Mbozi …’
‘… and this is how you treat me?’
‘Mr. Mbozi …’
‘We are a sovereign country. We are not cow dung under your shoes that you simply scrape off and dispose of like …’
‘Will you shut up! God damn it, man.’
There was stunned silence in the room. Mr. Mbozi looked across the table with his mouth open, stalled in mid-sentence, his eyes wide open. The only audible sound was the hum of the fan, labouring in its task of futility. Mr. Johnson mopped his brow, took a deep breath, and scratched behind his ear with his little finger. He did not like losing his temper, or for that matter showing any sign of loss of control. ‘This is as good as it will get,’ he said slowly.
‘But last year we were getting seventy-five cents on the dollar,’ Mr. Mbozi objected.
‘Mr. Mbozi. With all due respect, look around you.’
Slowly, Mr. Mbozi and his party followed Mr. Johnson’s arm as he gestured around the low-ceilinged, single-room structure in which they were meeting. To their right, sunlight streamed through the east-facing window, its inexorable path to the dusty concrete floor partially interrupted by the edge of the mahogany table. A green lizard lazily sat motionless on the window ledge. Suddenly, its tongue flicked out and caught a fly, and for a few moments there was detectable movement of its lower jaw and throat, before it became motionless again. Behind Mr. Johnson, a chimpanzee flickered between the slits in the louvered window as it floated through the trees in the distance. To their left, the floor-standing fan slowly circulated the warm air blowing in through the open west-facing window. Mr. Johnson picked up his handkerchief, leaving a layer of moisture on the table, and again mopped his brow. He surveyed the Mbozi party.
Posted by Gary at 02:43 No comments:

Synopsis of The Fixer

A diamond smuggling plane en route to Miami is blown off course by a hurricane, Wrong Way Lenny, and crashes in the Jamaican Blue Mountains. A small team from the smuggling ring sets out for Jamaica with the cryptographic keys needed to open the state-of-the-art digital safes on board the plane. In an "it seemed like a good idea at the time” moment, the team leader gives a Jamaican teenager, Janet Martin, the bag with the keys to carry it through Miami International Airport security, in the hope of avoiding any suspicion.
After passing through security, Janet is attracted to the desk by an offer for two free tickets to anywhere in the world in exchange for giving up her seat on her overbooked flight. She excitedly accepts the offer, and leaves the airport for a hotel, as a guest of the airline, with the smugglers' bag. The next morning she catches her new flight home, and forgets the bag at the hotel.
It takes the smugglers three months to find Janet. They want their bag, and they desperately want their diamonds.
Janet is kidnapped from a Jamaican hotel, and her parents are frantic. The Special Investigative Crime Unit, as known as the SIC squad, takes over the investigation, but Mr. and Mrs. Martin suspect something is wrong as the investigation stalls for spurious reasons. They turn to The Fixer for help, because they have nowhere else to go.
Posted by Gary at 09:27 No comments:

Exciting times ahead, as we wait patiently for everything to come together for the launch date of The Fixer. 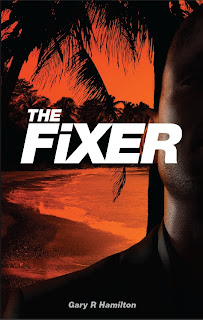